Employees Cause Most Corporate Data Loss

According to a new study (PDF, info required) from Compuware, IT departments should take a bow—only 1 percent of corporate data losses this past year were due to hackers. Unfortunately, the good news mostly ends there. Negligent employees are far and away the largest cause of data breaches, but IT managers also listed outsourcing and malicious employees (possibly ex-employees as well, one assumes) as two significant reasons why data breaches often occur. 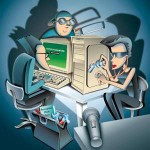 Security threats have been and continue to be ignored by corporations and institutions, despite a laundry list of laws that mandate data be kept safe and private. This is most prevalent in smaller private companies and institutions, were unfortunately management just don’t care.

I have been in many potential “whistle blower” situations and gone to great lengths to explain imminent dangers, their fixes and the law. Unfortunately since my interpretation of the law goes against management’s self-indulgent wishes, the risks persisted.

It is a well known fact that even though a good perimeter firewall/IDS combination will deter most attacks, the probability of attacks originating from within and thus defeating the firewall, more than double threats from outside the network.

Whether its an infected laptop from a visitor, a key-logger on an administrative system or a disgruntled employee engaging in a deliberate attack; the potential for a security breach from inside the network is much more likely.

Several steps must be taken in order to protect the data and all revolve around taking information security serious.

Identity theft statistics point to over 226 million data records of U.S. residents having been exposed due to security breaches since February 2005, which is extremely alarming.

The most common forms of identity theft: